Evacuees Return to Their Homes As Deadly California Wildfires Diminish

Diminishing winds and rising humidity allowed firefighters to gain an edge over the Saddleridge Fire in Los Angeles over the weekend but not before it had burned 12.4 square miles and damaged or destroyed more than 30 structures.

As of Sunday morning, the fire was more than 40% contained, the Los Angeles County Fire Department reported. Evacuation orders were lifted for the tens of thousands who had been told to leave their homes.

Los Angeles Fire Department spokesman Brian Humphrey said the bulk of the fire had moved into hillsides and canyons where firefighters were making steady progress slowing its advance, KTLA reported.

The cause of the fire has not been determined, officials said. Investigators are looking at reports that flames were seen coming from a power line Thursday as the fire began, the Los Angeles Times reported.

“We are aware of a story out there in the media from a witness who saw fire ... from a transmission tower,” Los Angeles Fire Chief Ralph Terrazas said Friday night. “We believe that witness, and someone else who said something similar.”

The tower belongs to Southern California Edison and was operating Thursday night, but it is too early to assign responsibility for the fire, Edison spokeswoman Sally Jeun said.

The utility shut off power for thousands in Southern California beginning Wednesday to reduce the risk of fires, but the Sylmar area, where the fire started, was not included in the shutdown.

At least one person died in the Saddleridge Fire. Fire officials said the man had a heart attack. A firefighter also sustained a minor injury in the blaze.

At the site of the Sandalwood fire in Riverside County, about 65 miles east of Los Angeles, a body was found in the rubble of a burned mobile home in Calimesa on Friday night, the Riverside Sheriff's Office said Saturday.

The sheriff's office said officials were still working to identify the remains. The fatality was the second one caused by the fire at the mobile home park. The sheriff's office had previously identified the first victim as 89-year-old Lois Arvikson.

Arvikson's son had reported her missing in the wake of the fire, and her body was found in her burned home on Thursday.

"She loved where she lived. She loved overlooking that canyon, and that beautiful view that she had," her daughter Judy Dorius told KNBC. "She cherished that every day. She sat there and drank her coffee, every morning."

The fire broke out Thursday and has burned about 1.7 square miles. It was 77% contained as of Sunday morning, according to CalFire's incident report website. It has destroyed 74 structures and damaged 15.

Video from a doorbell camera showed a garbage trunk dumping a smoldering load of trash, which sparked the fire.

The death of a 67-year-old man in El Dorado County may be connected to the power outages. The man, who was dependent on oxygen, died about 12 minutes after PG&E shut off power to the home where he was staying with family, the Mountain Democrat reported. 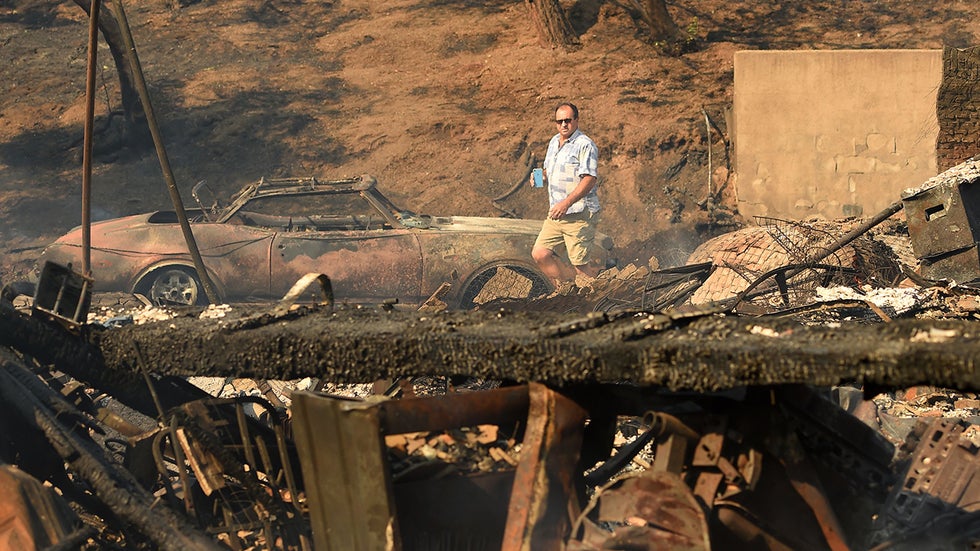 Relatives said the man didn't make it in time to an emergency device that would have supplied oxygen without power when the electricity was shut off at 3:30 a.m. Wednesday. El Dorado County Fire Chief Lloyd Ogan told the AP he couldn't say whether the death was directly related to the power outage.

"It's devastating beyond words," California Gov. Gavin Newsom said, according to the Associated Press. "Losing a family member is horrific and to the extent this was the reason why I hope that is investigated and I hope those responsible are held to account.

The Weather Company’s primary journalistic mission is to report on breaking weather news, the environment and the importance of science to our lives. This story does not necessarily represent the position of our parent company, IBM.


The Weather Company’s primary journalistic mission is to report on breaking weather news, the environment and the importance of science to our lives. This story does not necessarily represent the position of our parent company, IBM.